I gave up pop 10 days ago, and have been doing really well with steering clear of it all together. Yesterday, however, I had a cocktail that contained some ginger ale.

I say that I’m still on a no-pop streak, because it’s not really any different than drinking a beer or cider; it’s fizzy, but I didn’t sit down to drink a big glass of pop at the expense of drinking water (which is what I used to do, and the heart of the habit I’m trying to break). I still drink at least 3L of water per day, so good habits are replacing the old ones. My boyfriend, on the other hand, thinks that having pop in any form breaks my streak.

I’m not sure who’s right!

Indulging, and moving on

Last night, I went out to celebrate a friend’s birthday. I indulged in some fried food, ate a rich dinner, and had three alcoholic drinks. Now, I am proud to say that I shared the calamari appetizer, and ate only half of my champagne and lobster risotto (I took the other half home to my boyfriend), but I am upset with myself about one thing: I took the cash out of the bank to pay for it, knowing that I had a pending charge that would come out of my account sometime this week. I knew as I walked home from the restaurant that I should go to the bank and put some extra cash back into my account, so that I wouldn’t get dinged with an NSF charge if the fee came out overnight last night, but I didn’t because I was feeling full and a little drunk, and I was lazy.

The pending charge was attempted. I got hit with a $45 NSF fee. I was very, very angry with myself when I woke up and saw the state of my bank account.

Then, I took a deep breath. I told someone how I was feeling, and realised that they still loved me, even though I make mistakes. I realised that I should treat myself the same way, so I’m letting it go. In the greater scheme of things, $45 isn’t worth beating myself up over. Sure, it’s not an inconsequential amount of money to me, with my state of debt and stage of life… but there’s nothing that can be done about it now, except to move on and continue working towards being the best me that I can be.

I love cilantro. I know that some people aren’t crazy about it (and a lot of people even think it tastes like soap!), but I adore the flavour of fresh cilantro! I could eat it every day (and sometimes I do).

Here’s a recipe for a Mexican-style topping of onions, black beans, lime juice… and delicious cilantro! 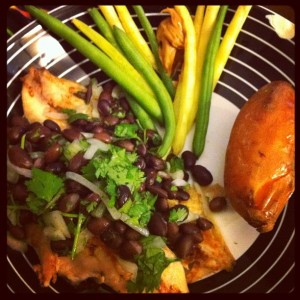 Mix all of the ingredients together in a mixing bowl. Cover and refrigerate to let the flavours blend.

Serve over your favourite lean protein — chicken, tilapia, and lean steak are my favourites! In the picture above, I served it over 6 oz of tilapia, with some green beans, Wowbutter, and a baked sweet potato. Delicious!!

Five pounds down, and six days without Coke Zero!

I love to drink pop (that’s what we call soda up here in Canada!), but I know it’s terrible for me. Not just the sugar-laden regular pop, but the chemical soup of diet pop, too. That’s why I decided that I’m cutting it out of my diet. Last Wednesday, I drank my last can of Cherry Coke, and I’ve vowed not to look back. It’s been six days now, and I’m going strong! I’ve starting drinking at least 10 glasses of water a day, along with some amazing loose teas from DavidsTea and my morning coffee at work. I feel great!

I’m really proud of my NSV (non-scale victory), but I’m also proud of my weight loss so far… I’m down five pounds since I started last week! It sounds like a lot to lose in a short time, but I know that in the beginning I lose the water weight I’m retaining from eating so much greasy, salty food. The weight loss will slow down soon, and I’m both okay with that and totally prepared for it.

I treated myself to a small bag of barbeque chips with my dinner, though! I figured I deserved it, after walking home 5 km from work, and doing well with my goals! I’m still within my calorie goal for the day, so I’m allowing myself this treat without feeling guilty. I think that’s fair… don’t you?

I’ve been eating clean and enjoying some light workouts for the past few days, so my body should be ready to start taking an Alli pill with every meal. I’ve lost four pounds already, and today I’m starting more intense workouts, so I’m hoping that I can keep up the momentum!

Here’s one of my favourite breakfast recipes I’ve been trying out for the past couple of days! It’s under 200 calories!

I chopped up all the vegetables and sautéed them in a pan with a spray of Pam. Then, I moved them to a bowl and scrambled the egg whites before returning the vegetables to the pan and giving the whole thing a quick stir-fry.

I topped it with two spicy tablespoons of five-chilli salsa! SOOOO GOOD.

We just got back from a week and a half in Florida, including five days at Disney. It was an amazing time! We ate like kings, walked for miles, and toasted the sunset on the inland waterway. It was absolutely beautiful, and it really pumped me up for getting healthy in time for Hawaii next year.

But… I gained NINE POUNDS last month. I’m back to nearly my highest weight ever, tipping the scales at 194.2 lbs. I eventually want to get down to 132 lbs (or thereabouts… I’ll see how my body looks and feels as I go along), so I have 62 pounds to go.

Today, I’m hitting the grocery store to pick up supplies to start the Blogilates 90-Day Challenge. I planned out my meals in my notebook on my iPad and figured out what I need to buy to make them. I updated my weight on MyFitnessPal, and set up my goals to accurately track my caloric intake and exercise. I also have a one-month supply of Alli, so I’ll be using that to help kick start my journey into healthy eating. Since I was eating such rich foods on vacation and I’m planning to use Alli during my first month of healthy eating, I’m going to start cleaning up my diet over the next few days, and ‘officially’ start the challenge on Monday.

I’ve got a few more things to do, before then:

Yesterday, my allergies were so bad that I spent half the day working from home, using the neti pot on my nose and counting down the minutes until I leave for Florida, where ragweed is no longer in season. While I was home, I mixed up a hair mask to put on my newly (professionally) platinum’ed locks. 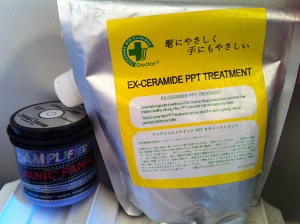 I mixed equal parts of Manic Panic ‘Virgin Snow’ toner, and the ceramide treatment recommended to me by a hairdresser. I put it on my hair, wrapped myself up in plastic wrap, and waited half an hour. When I rinsed it out, my hair was noticeably softer and shinier. It hasn’t had time to get brassy (I only had it cut and dyed on Saturday), but the colour still seemed to have a bit more… oomph! 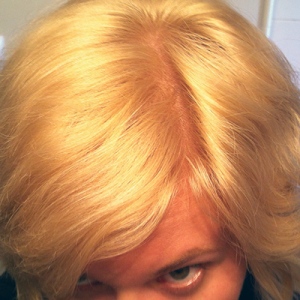 I bought some Pantene Silver Expressions on the way home, while I was picking up Kleenex for my disgusting, allergy-mucus filled nose, to keep my hair shiny and brass-free.

This morning, it’s back to work at the office, so I started the day with a healthy Green Monster Shake I saw on Pinterest. Holy crap, this thing was delicious. I mixed it up and drank it down within minutes… I still can’t believe it had so much good-for-you spinach in it! It tastes like a nutty banana shake! I made mine with roasted soy nut butter, rather than peanut butter (my boyfriend is allergic to nuts), and it was absolutely divine. Spock thinks so too: 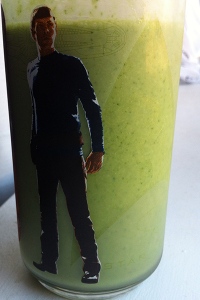 Today, I’m on a rest day for couch to 5K, so I’m thinking I’ll hit the gym to work my arms, or maybe do some yoga when I get home from work tonight. I’m really enjoying getting active these days!

Couch to 5K: Week One

Last week, I started the couch to 5K program using a super convenient iOS app that I downloaded. I am firmly on the ‘couch’ end of the exercise spectrum, but I’m happy to say that I completed the first three runs! I have to admit that it was a bit difficult for me (between my general level of un-fitness and my seasonal allergies, there was some wheezing going on!), but I’m determined to stick with it.

The first week is made up of three sessions, which consist of a 5 minute warm up period, 8x 1 minute run/1.5 minute walk, and a 5 minute cool down period. I think I may repeat the same level a couple more times to finish out this week, and start the second week sessions when I’m in Florida.

We leave for Florida on Monday morning, and we’ll be spending a few days at my parents’ condo before heading to Disney World for a few days! I found out that the Port Orleans resort we’re staying at has a walking/running path, so I’m hoping to get in a couple sessions even while I’m down there. We bought the meal plan, so I think I’ll need the extra exercise, even with all the walking we’ll be doing in the parks!

When I get back, I want to try the Blogilates 90-day Challenge, which includes a diet and exercise plan to ‘eat clean and be active’ for 12 weeks. I may not be able to keep up at the start, but I’m hoping that like the couch to 5K, it will get easier over time!

I’ve struggled with two things for almost as long as I can remember: my weight, and an addiction to hair dye.

I started to get pudgy and inactive around the time I was eight or nine years old. Through high school and university, things went up and down, but the general trend was up, to my dismay. Even though I know things have gotten worse and worse, I’ve never successfully changed my relationship with food and exercise in any meaningful way.

I coloured my hair for the first time when I was fourteen years old. I’ve been every colour of the rainbow — blonde, black, red, green, blue, purple… the list goes on and on! I usually change hair colours more often than the seasons change; lately, this has meant that my hair is becoming dull, dry, and damaged.

Starting now, I want to change the way I think about food, exercise, and hair dye. Next year, I’m going to be taking a trip to Hawaii, and I’d like to be fit enough to try surfing for the first time… if I could do it with my long, wavy blonde hair streaming down my back, that would be ideal! This blog is where I plan to record my workout logs, healthy recipes, haircare tricks, and my general thoughts when I need to record them to keep my sanity.